Stressed and triggered students at he University of New Brunswick were treated to a cuddly dogs to cheer them up during exam time.

The state broadcaster claims that 4 'therapy dogs' were available for students to play with on Wednesday.

The event was hosted by by the UNB Health Centre, UNB Counselling Services and the student union. The volunteers were from the Saint John Ambulance and River Valley Obedience.

Conservative pundits such as Milo Yiannopoulos have mocked the event, but were shocked to learn the same thing happens in Texas. 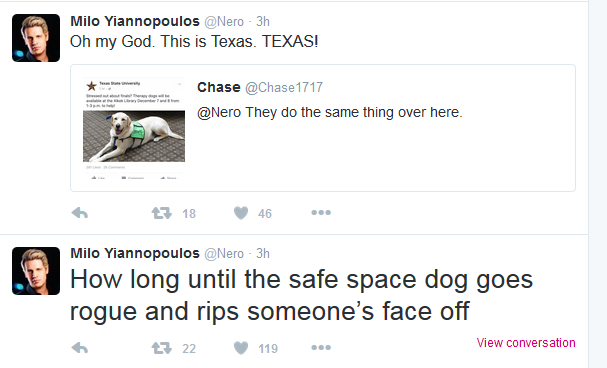 No word on whether any cats feel offended by the canine privilege on full display.

READ Brian Lilley's book CBC Exposed -- It's been called "the political book of the year."

The CBC actively campaigns for Justin Trudeau and the Liberals, so why should we subsidize them?
SIGN THE PETITION to SellTheCBC.ca -- The time has come!

You must be logged in to comment. Click here to log in.
Jessica Barden commented 2018-12-13 03:41:16 -0500
Based upon you have before quality (days? weeks?), the amount of studying could modify as well. If your examination is the next day, then by all means, research as lengthy as possible like https://www.courseworkonline.co.uk . It also relies upon on if you think that your prepared for quality. If you have a few times or per 7 days or whatever, distribute out your studying. Practice a couple of hours one day and a few more the next until you think that your prepared to be a “topper in exam”
Ashley Brubacher commented 2015-12-14 14:44:01 -0500
I personally think this is a great idea. Who doesn’t benefit from the warm embrace of a friendly canine? Also, exam time is very stressful for students, there’s no shame in needing a good stress release. If there were puppy safe spaces for students that had been triggered by a microagression, however, things would be different.
Andrew Stephenson commented 2015-12-14 11:17:23 -0500
I think you’re overinterpreting it. It is literally just some students playing with some dogs. I hardly think that society is going to collapse because some students played with some dogs. That surgeon has stress relief mechanisms, in fact coping mechanisms are an integral part of their training. Do you really want an unbalanced, wound up surgeon working on you?

The university generally has nothing to do with this. It’s usually some student association that collaborates with a local dog training agency. The students have fun, the dogs have a training opportunity, the charity raises its profile, and apparently some grumpy conservatives get really, really upset over trivialities.

Andy Neimers commented 2015-12-14 04:12:42 -0500
Andrew Stephenson… There’s no “understand the question” involved here, just the fact that the University of New Brunswick went “simple” on this issue and could just as well have provided stuffed teddy bears to these exam-stressed babies… Dogs do indeed provide wonderful comfort for people who love them, and sick children, or adults in nursing homes… But it is the worst manifestation of a nanny state when a university starts catering to such fetal position indulgences for supposedly grown adults taking exams… What’s next?… Will surgeons going into a major surgery be provided therapy hugs with doggies because the next six, or eight, or ten hours in the operating theatre are going to be “stressful”? So, how about a therapy doggie being provided the next time you have to face your bank manager about that stupidly overdrawn account, or your teenager has to take his/her driving test?… Let’s have HUG DOGGIES FOR EVERYONE!…
Andrew Stephenson commented 2015-12-12 16:11:00 -0500
“We wouldn’t want them to have to learn how to deal with the different stress levels in the real world.”

How do people deal with stress in the real world? Often … by playing with their dog.

When you start tossing around “nanny state” around something that has nothing to do with the government, it makes it painfully clear that one doesn’t understand the question.

Liz Rosie commented 2015-12-12 14:57:05 -0500
Preparing our children for the future ! We wouldn’t want them to have to learn how to deal with the different stress levels in the real world. They might find out they have their own inner resources to count on instead of the nanny state. It just hinders the’ turn them all into sheeple’ process the Marxists are going for. Gotta keep them dependant and weak, in order to produce good zombie soldiers for the cause.
Andrew Stephenson commented 2015-12-12 14:10:07 -0500
" It is that the students are so frail that they need to get comforted by dogs at the time of an exam. "

That’s kind of the point. They’re not frail. As I said, I’ve actually seen this in action. The students view it as an interesting and fun study break. I don’t think any of the participants I saw at U of R were anywhere near emotional meltdown, they’re probably less stressed than the commentators who get worked up about how society is clearly breaking down because some students played with some dogs.

Except the Rebel, apparently. The only website on the whole planet that get upset about some people – heaven forbid! – playing with some dogs.

Sam Young commented 2015-12-11 21:40:57 -0500
One of these days, I am going to go to Korea and eat dog.
Jim Barnes commented 2015-12-11 18:58:08 -0500
When you think you saw it all…….
Guy Fraser commented 2015-12-11 17:39:37 -0500
The dogs need a safe space from SJW freaks … I mean suck muffins … no no I mean purple penguins … mea culpa.
Bruce Kirk commented 2015-12-11 16:33:20 -0500
@david Fletcher
I have seen first hand the astounding benefits of therapy dogs, no dispute there. This latest bit of stupidity on campus is only re-enforcing the ‘poor me I am a victim’ mantra and simply makes a mockery of the therapy dog initiative for people that truly need that help, not a bunch of whiny ass kids feeling sorry for themselves
David Fletcher commented 2015-12-11 16:20:47 -0500
I’m as conservative and unsympathetic to “safe spaces and micro-aggression” as anyone, but I have also worked with St. John Ambulance Therapy Dogs for 16 years, with both seniors and ‘special needs’ kids. I am involved in a trial programme at the local college where students get to meet and cuddle with the dogs during exam week. Far from feeding their self-absorption, the students focus on making the dog happy; in short, they get out of their personal bubble for a change. There is certainly a more positive and social atmosphere developed. It remains top be seen if the marks are improved though!
Bruce Kirk commented 2015-12-11 16:15:06 -0500
@ Peter Netterville
I can’t believe you think “studying and learning the material” has anything to do with indoctrination, er, education
Just the fact that you would say such a thing only proves the need for infant care, er, safe spaces
I am going to march right down to the enablers department, er, student services and start a petition to have you barred from speaking
Blair Watson commented 2015-12-11 15:42:27 -0500
Here’s an idea let’s roast the dogs,its cultural, will call it dog on a stick…that will make them feel better, the per things . .what a fuckin joke.
Jd Vetman commented 2015-12-11 13:06:19 -0500
I go to Happy Gilmour’s “happy place”.
There’s no need for stress anymore .. with the new world order taking place, this will be a much better planet where everyone lives a stress free happy life together …. right ;)
Jason Weaver commented 2015-12-11 12:45:57 -0500
This is yet another example of our new generation showing how free and independent they are. Wait a second… Wouldn’t being independent mean not depending on any crutch to get you through something? Oh, I forgot! This is 2015, and all of what we once knew is obsolete and no more. Welcome to our future boys and girls and whatever else you might “identify” as.
Peter Netterville commented 2015-12-11 12:43:39 -0500
I know what would make the exam less scary … study, learn the material.

Safe spaces. What a crock! We have a generation of wimps and babies.
pj hillis commented 2015-12-11 12:21:39 -0500
trigger warnings and safe spaces won’t help when you are staring at the barrel of a jihadi AK 47.
R Neufeld commented 2015-12-11 12:10:14 -0500
Our education system is for the dogs!
Keith Barnes commented 2015-12-11 11:55:56 -0500
How long before the Muslims start screaming that Dogs are unclean and start slashing doggy throats? Scum that they are.
Russell Piche commented 2015-12-11 11:54:12 -0500
it will be fun to watch the fallout when muslim students drop the hammer on safe dogs (because the same cuddly therapy dogs will make them feel unsafe and un-halal). the SJW heads will spin when new age safe spacers go against the perpetually offended religious. which side will win?? LOL. all this, and more, in Backward Hell Nightmare Canada.