Recalling history can protect us now, and in the future. Sometimes you really do have to fight the enemies of humanity and freedom and faith.

Thanks to some recent Facebook posts, Ann Barnhardt vids, and Victorian boy’s historical novellist G.A. Henty (here’s the entire book online: No Surrender! A Tale of the Rising in La Vendée), plus a little innertube research, I’ve been learning rather a lot about a still hush-hush moment of the French Devolution: the purge of the Vendée, or the Vendée War (pronounced: Vonn-day), 1793-1796.

Like all nearly ominipotent moral busybodies, the early 1790s Paris radicals promised all the good things for free, and then got busy filling all of France with the benefits of denunciation, confiscation, and decapitation. You know, for the good of ‘The People’ (in Paris). They imprisoned clergy, doctors, merchants, aristocrats, and uppity politicians, to cut the head off any possible resistance.

Evil revolutionaries will always attack faith & clergy, any likely leaders, and any punish & attack man or woman who fights back or speaks out, i.e. ‘counter-revolutionaries’. Watch for it.

Not everywhere gave in so quickly: Lyons fought back; Toulons actually invited the British navy in; and the hardy peasants of a little patch of farm and hedgerows and forest called the Vendée grabbed their pitchforks and farming implements.

It’s important to look at your maps, digest the news, pray about it, and act accordingly.

The locals – at first, largely gunless peasants versus troops – actually kicked the bums out. Paris reeled.

The French Revolution tottered on a cliff-edge as peasants fought the French military to a standstill over several years, until overwhelmed over 3 years by total war: burning and destruction of everything in the Vendée, killing of livestock, burning of whole villages and towns, atrocities against men women and children, mass murder & execution…all the usual radical/revolutionary list of horrors which were and are repeated so many times over the ensuing century and a half.

Present at some of these battles? A young Corsica-born artillery commander, named Bonaparte. He refused to fire on non-combatants, and was so impressed by the courage and decency of the Vendeans that when he took power in 1799, he restored many of the freedoms of the Church.

The enemy are not usually as strong and united as they appear. Learn their weaknesses, and yours. Act accordingly.

Sadly, the leaders of the resistance didn’t get the word out to England, or even across all of France (or put out a blog or online fundraiser), or any other appeals for help. At several points during the uprising, regular British troops and money and arms would have broken the back of the regicidal peasant-murdering revolution.

Though victory was in reach, yet the ordinary folk of the Vendée just didn’t have it in them to march on Paris itself. The whole ugly, bloody, petty, murderous new regime was run from Paris, and it might have been overthrown by a truly mass uprising.

Widespread communication, acting in time, and with allies, can save a lot of sorrow later.

At least 250,000 locals were slaughtered, starved, or executed, for the crime of wanting their Catholic faith, their little patch of earth, and not to be meddled with by cold-hearted monsters like Marat, the demonic Danton, bloody Robespierre, and their ilk. All such ‘revolutionaries’ drink the blood of others, before the revolution consumes them also.

Freedom-fighters against true tyrants leave a record of their success & failure. Study it, and endeavor at the least to make fresh mistakes, and not repeat the old ones.

Learn up about that time, which foreshadowed so much of our time, and the real roots and results of ‘progressivism’. The revolutionists can only succeed by ever more meddling, dominating. and – eventually – killing, and depicting the world in two shades only. The enemies of the revolution are not just different, or disagreers– no, they are the enemies of humanity, of hope and history and the future. Exterminate!

How powerful and humiliating to the 1790s regime was this peasant war in the Vendée? This much - France will still not officially acknowledge that anything of note happened in the Vendée then, or now, over 220 years later. 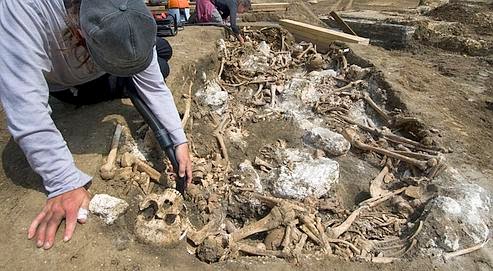 You know, don’t want to raise the ghosts of the past, or poke into any mass-graves. Even though those events have echoed and echoed across further fields of blood and genocide inspired by the destructive French example.

After all, you know who was a huge fan of the example and methods of that horrid revolution? A spotty, adultering library-dwelling mooch on his friends...named Karl Marx. The Communism he inspired led to at least 150 million dead. So far. And there were others:

“Both Lenin and Hitler praised their Jacobin filiation. From the Jacobin sans-culottes came the Red Guard and the SS. The red and black ideologies of extermination justified their genocides with arguments similar to those used by the Convention to justify the genocide in Vendée. And the Jacobin ideology continues to inspire the subversion of the ideas of liberty, equality and fraternity into a totalitarian individualism that destroys the natural communities, beginning with the family, and that confiscates the fundamental freedom of education of children by their parents.

Less than twenty years after the end of the USSR, the Russian State, even though in some ways a continuation of the Soviet system, honored itself by repenting for the assassination of the Tsar and his family, and by replacing Russia in its historical and religious continuity.

France is in need of a similar symbolic gesture. The State, by repenting for the original crimes of our republic would liberate our national memory, and accomplish a far-reaching act of French Friendship…”

Stick that in your festering & blood-soaked ‘La Marseillaise’ and smoke it. Nasty lowlife mass-murdering cowards. The modern French Left still deny history, reality, bones and atrocities, in their quest for utopia, human self-purification, and endless lying about their opponents, past and present.

Learn now, learn fast, read the signs of the times.

You must be logged in to comment. Click here to log in.
mark macfadzene commented 2015-07-28 08:44:39 -0400
so many parallels of the past that seems to be setting up in the present…we just have a hard time believing they will follow those past historical examples.