Donald Trump is the presumptive Republican nominee. Constitutional conservatives are up-in-arms over the bombastic billionaire’s belligerent beat-down of the republic’s only viable savior, Ted Cruz. Meanwhile, the Trump surrogates are tripping over themselves in joy, tantamount to a prepubescent boy on Christmas morning.

Now what? Here's a breakdown of the divisions and doubts: To put them in Trump terms, the “Yuuuge”, the “Frankly Not That Great”, and “We Have a Serious Problem.”

The Yuuuge
Like him or not, Donald Trump is helping fight the culture war.

The ripples of his (stubby) middle-finger-politics, firm opposition to authoritarian speech police and social justice cry-bullies have been felt on college campuses. If not in intent, then in effect, Trump has given voice to countless students, who despite not necessarily identifying as conservatives, are fed up with the left’s identity politics and culture of victimhood.

As pointed out by Breitbart editor-in-chief, Alex Marlow in an interview with Milo Yiannopoulos, every cultural movement needs a “cool guy”. The left has had this down for decades, with Hollywood and music-industry celebrities evangelizing the gospel of leftism to the masses.

Runner-up Ted Cruz was never an effective communicator in this manner. Despite resonating with by-the-book constitutionalists around the country, Cruz just couldn’t package his message to a wider audience. Where Cruz failed, Trump succeeded immensely by invigorating a backlash-movement against the cultural left with his “we’re going to take our country back folks” mantras.

Take this tweet as an example, Donald Trump flagrantly fires back at socialist senator, Elizabeth Warren – going after her for lying about her non-existent Native-American heritage – after her Twitter-tirade against the Republican nominee. 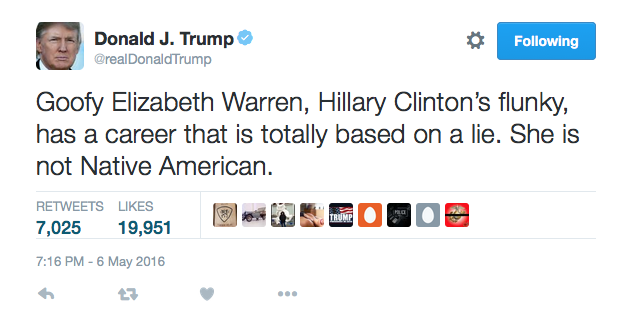 On specific policy, Trump’s firm standing on immigration and national security make him the paragon of the storybook-strongman. This precisely has won the hearts and minds of prominent conservatives ranging from NYT bestselling author and professional provocateur, Ann Coulter, to the often cited immigration hardliner, senator Jeff Sessions.

For a comprehensive list of renegade Republicans who’ve hopped on the Trump-train, The Daily Wire’s Robert Kraychik breaks it down here.


The Frankly Not That Great
With his protectionist positioning on free trade, Trump actually finds himself to the left of Hillary Clinton on a key issue. However, despite his Bernie-Sanders-esque incoherent rambling about how NAFTA has ravaged America’s economy, the fact is that free trade and NAFTA have worked to the benefit of the United States, not to its detriment.

“What drives bilateral trade deficits between the United States and other countries is not, for the most part, trade policy, but simple supply and demand. The United States exports a lot of farm commodities and industrial products, along with a great deal of very high-end goods.”

We Have a Serious Problem
Where things seriously head south, is in asking the overbearing question and foundation for the #NeverTrump movement, “who is Donald Trump?”

Is he genuinely an immigration hardliner who wants to strengthen America’s military and will fight to uphold the constitution? Or, is he a Clintonian con-man who’s managed to pull a ruse over the plurality GOP primary electorate?

As noted by Daily Wire Editor-in-Chief Ben Shapiro, it only took Trump 24-hours since securing the nomination to do a full 180 on four key issues.

Whether it’s replying “I’m looking into that” when asked about minimum wage increases, or pivoting to suggest he’s “not necessarily a huge fan” of his originally proposed tax plan, and is considering a more progressive system. The question stands, will the real orange Donald, please stand up?

You must be logged in to comment. Click here to log in.
Rick Plesnik commented 2016-05-15 13:44:55 -0400
Were I an American Voter, the mere fact the Saudis are afraid of Trump would be reason enough for me to vote for him!
Anonymous commented 2016-05-14 15:26:07 -0400
Trump has told the left-wing you can’t bully him and get him to capitulate with ways they get the right-wing conservative establishment to do so with bigotry allegations, threats of not voting for them (like the left would?) and protests.

Unlike the right-wing conservative establishment, Trump will not cower, placate to stop the allegations/threats/protests and WILL FIGHT BACK.

Likewise, plenty of right-wingers along with left-wingers fed up with catering to selfish big business, like banks and insurance companies ripping out the consumer (as they basically charge the same rates)

Jack Pallance commented 2016-05-13 17:38:17 -0400
I agree he is the guy we have. And we are up against gay bathrooms, and continued lies from Obama 3. Still its hard to imagine someone as goofy and tacky being POTUS.
Jack Pallance commented 2016-05-13 17:36:47 -0400
Well, I like Ben and think he is much more honest person that Trump. With that said its about objectively looking at Trump. His negatives are his insincerity, perennial lying, his disgusting supporters, his narrcism, siding with Democrats, supporters LGBT bathroom abuse, supports minimum wage, and used Mexican labour in his operations. The good side is his stance on immigration, he drives Obama crazy, he pisses off Ryan, support of Israel to the West Bank, tax cuts, larger military, ect. His good points outweigh the bad. I don’t personally like him or his stupid show. The main problem is all we see is the character “Donald Trump”. He is a caricature. We have never seen the real Donald Trump. Never. So we are left to judge on what we see in his performance and his positions he has taken and what is on his website.
Marilyn Neilson commented 2016-05-13 15:58:53 -0400
I would love for Ben Shapiro to produce any audio clip where Donald Trump mouthed the vile term “schlonging”. Shapiro is just bitter and twisted because he stupidly became caught up in Michelle Field’s contrived B.S. wherein she falsely accused Trump’s campaign manager, Corey Lewandowski, of “assaulting” her. It was all garbage, but silly Shaprio believed Michelle (who, incidentally, is a repetitive source of other false accusations), his co-worker at Breitbart News Network, and in a ridiculous show of unnecessary “gallantry” and solidarity, quit as an employee of Breitbart News Network in tandem with Fields. He likely now regrets such an ill-thought move, or he definitely will when Trump’s team ultimately proves that Fields is a compulsive and manipulative liar, making Shapiro to look a bigger fool than he is already trying to do himself with this interview. As an aside, Ben Shapiro desperately needs a speech therapist in an effort to reduce or, hopefully, eliminate his cringe-worthy nasal voice.
Daryl Herman commented 2016-05-13 12:50:21 -0400
To whomever wrote this article – You must be one pampered idiot! Look at all the jobs the USA has lost – for whatever reason. The illegal immigration problem – is just that a problem! Trump has never said he was against immigration – just illegal immigration – which to anyone in their right mind has to agree with. Who the hell has to pay for all the benefits these illegals demand?! Have you not noticed how the once great USA military has been decimated by that Muzzie dip=shit you have for President? ..or all the corruption surrounding Obumer & Clintoon crooks?? North America needs a REAL businessman running it not some Sociopath / LIAR of a n***r who is making all of it’s allies into enemies and making the Americans totally “gender confused”!
Donald Trump has been consistently saying the same things about the US government & economics for 30 years – whereas the present & near past presidents have all been bankrupting the US.
Yes, Trump is the only glimmer of hope for the USA and North America – and I hope when Trump becomes the POTUS – he will take a bit of time to come and slap the shit out of that pompous ass we Canadians have sitting as the PM of Canada – TruDope!
Everyone needs to board the Trump Train!!

Keith Barnes commented 2016-05-13 12:17:30 -0400
Who is this Leftist Loving person that wrote this article? Cannot he see that Trump is the only glowing light in the darkness, that we find ourselves.

Trump is the last and only hope that the western world has. With the Leaders of all Western Countries, bowing down to Muslim War Lords, we may as well commit suicide if Trump dose not win.

Wake up Canadians, dump JT and pray for Trump.

The alternative will be grim.
Liza Faucher commented 2016-05-13 12:11:57 -0400
It seems stupid and counter productive to be vilifying Trump at this stage in the game. News flash, there is no alternative. Trump is it. By all accounts he will have many competent people from which to choose for his advisors etc. It’s Trump or Hillary, the Republican hold outs need to get behind Trump. The American people aren;t going to put up with messing with the process, such as a third party interjection to try and stop him. Romney and the other old guard Republicans can hate him all they want it ain’t going to fly with the people.
D Warren commented 2016-05-13 11:58:37 -0400
“the republic’s only viable savior, Ted Cruz” ? ? ?
Only problem with Cruz . . . he could NEVER win in November . . . NEVER ! ! !
But that matters little to the like of ole Ben or the Beckster . . . lol
Reality is . . . Trump has filled the void of the folks of ALL political spectrums who are sick and tired of the feckless, incompetent “Politicians” in DC of both parties . . . who fill their own pockets and ignore the citizens.
I believe Trump can win it all . . . and he will build the wall, encourage the illegals to leave, stop radicals from immigrating to the USA and re-examine trade deals. He will also turn a lot of over to the States like Education, where they should be according to the Constitution.

When does live in America get bad enough for the Anti-Trumpers to wake the h*ll up ? ? ?