Some moments perfectly crystallize the spirit of the age.

For example, did you see that Dr. Drew CNN roundtable about Jenner where the psycho beefy Jewish kid neck-grabbed the tranny guest, and threatened that the tranny would leave the show in an ambulance? And later, when, the Jewish kid agreed with a commenter on Twitter that the tranny should be curb-stomped?

And (warning, shocking, offensive) a curb stomp is what, exactly?

The assault & threat came after several other panel members said that while Bruce Jenner wasn’t a hero, he was bravely speaking out for the countless (?) young people who were suffering and being bullied and dying because of their longing for women’s clothing and surgical mutilation.

“Did she deserve the honor, probably not. Is she brave? Of course,” Tur explained. “Being brave is being yourself. And being transgender is about the bravest thing you can do.”

Gotcha. Bravest. My great-uncle Gren might disagree and his family and friends, but he was probably a cisgendered white racist scum, so shut up, Gren.

Then Tur, Son Of Og (his parents called him Robert Tur) got Offended™ (girl-screams!) by the way Ben Shapiro wasn’t joining the group-quack and was “bravely being himself”, sticking to his guns that Bruce Jenner was still a man, and probably mentally ill, when– son of irony itself!– bullying Tur actually grabbed the young commentator by the yoke of the neck with his beefy hand, and threatened to send him home in an ambulance.

Ambulance? That is: so to physically injure Shapiro via violence that the young married father of a new baby would not be able to leave the set or the CNN building under his own locomotion, but would require a gurney and EMTs and an ambulance, thence to be transported not to his hotel or home, or the airport, but to a local hospital for extensive care and recovery. All via Og, Son Of Tur, getting his inner neanderthal thug bully act on, because Offended™.

Apparently Tur, Son Of Og did not have an “Ohcrapocrapocrap what did I just do?” moment at any point while the CNN cameras watched. Dr. Drew was AWOL, or gobsmacked, or quietly delighted at some exciting ratings-boosting TV gold, but did not act like a man or an actual host/ moderator and demand civility, and call out Tur, Son of Og for acting like a freaking psycho, and technically assaulting a fellow guest on the show.

Regrets? Apologies? It is to hysterically laugh– later, on Twitter, Bob Tur agreed with a commenter on Twitter that Ben Shapiro should be curb-stomped (i.e., crippled, possibly unto death).  I devoutly hope that Mr. Tur is properly charged & arrested for assault, threat-making, and civilly sued up the wazoo (if he still has once, post-surgically).

Awkward silence ensured as the politically correct in the group tried to decide what they were supposed to say, and how to circle the wagons around Tur, Son of Og, from his legal & social & commentarial buffoonery.

The grab-n-threat was shocking enough, but I was actually offended and angry when the group-quacking restarted, once people got over their shock, re-assigned blame, and started snarking at the assaulted young man.  You can hear the group-think: ‘OK, Ben’s a Jew which used to be special status, but that’s not as special a Special Status as Caitlin and Zoey, and we can’t appear to agree with Ben against Zoey, so the Jew gets it. Because Offended™… whew!’

Quacked they variously unto the camera: “Well, Ben should have known that he was being very provocative, terribly Offensive™ to Tur, Son Of Og” etc. etc., had-it-coming blah blah blah, because self-definition and tranny and Jenner and all that is the new holy idol for worship and effusive praisings. And bravest thing ever.

So Where Are We, Exactly?

So: the new new rules, as demonstrated by Tur, Son Of Og, and his fellow guests?

(1) Bullying is only bad when (if?) conservatives do it.. (in this case, it’s just fine during the course of a civil and public and televised conversation about gender).

(2) You can violate all the rules of civil discourse and decent society, then threaten to grievously injure your fellow panelists to the point of hospitalization, and later agree that they should be mutilated and possibly killed by extreme cruelty and violence, if they dare point out that the current truth about trans-everything-ism is not actual “Real” reality.

(3) Being Offended™ covereth a multitude of sins, including lying, group-think, moral cowardice, self-deception, brutality, death-threats, and– well, anything done against the Enemy of The Moment.

(4) We are all living in Upsidedownland. Please adjust your brain constantly. Or else. Welcome to now.

And now you know. 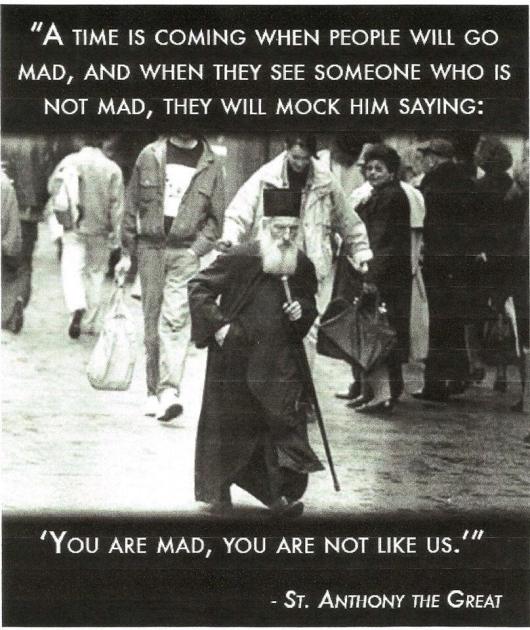 You must be logged in to comment. Click here to log in.
Mary-Frances Radway commented 2015-07-23 11:46:11 -0400
Sadly, if you don’t go along with all of the right wingers you are bullied into being quiet. There are people on the internet who do nothing but troll and attack. The internet now has a mob mentality – agree or be bullied. The biggest bullies these days seem to be the transgenders/homosexuals/lesbians and all their friends and families. God forbid you disagree with any or all of these groups and you are literally beaten into silence. It is a sad states of affairs when people can no longer have an opinion that is different than mine or yours. You don’t have to agree with their opinion, but they are still entitled to it.
Alex Brooker commented 2015-07-21 13:04:12 -0400
Great article. The exchange between Tur and Shapiro was bizarre, sure it was a heated debate and something Tur clearly feels very strongly about but to put hands on him, threaten him and apparently wait for him outside… That is mental and highlights how nasty the left get when their arguments aren’t repeated back to them. It was also amusing to watch Tur respond in the most blokey, laddish, macho way possible which is to threaten to beat someone up and wait outside in the parking lot for a dust up, like some drunken idiot outside a bar.
Interesting to see how Shapiro’s legal proceedings go, feel he will be fobbed off by law enforcement who won’t want to risk running afoul of a social media hate campaign against them.
Liza Faucher commented 2015-07-21 11:30:47 -0400
Thanks for that link David!
David M. Swindle commented 2015-07-21 11:10:09 -0400
Excellent post, Binks! Very well said. I look forward to more Megaphone posts from you. Ben is my generation’s most reliable and trustworthy activist-commentator-talk radio host. Those who enjoy his TV appearances should hear him and Elisha Krauss (she’s also very strong) each morning Vs their “mushy moderate” co-host Brian Whitman on Am 870 the morning answer – http://www.am870theanswer.com/ They’re on from 6-9 PST and are based in California. I’ve gotten into the habit over the years of listening to them while I start my morning editing, writing, and blogging.
Marjorie Spacek commented 2015-07-20 21:22:20 -0400
It used to be that a few places in the world were “La-la land,” now thanks to all the wonderful advances in communication, everywhere is. Ah! Brave New World!
Deborah Graupner commented 2015-07-20 21:16:19 -0400
I think Ben was set-up for the agenda!
Peter Prodoehl commented 2015-07-20 19:12:58 -0400
Thanks for that Webelf.
Looks like the transgendered are using radical Islam tactics to get their point across.
I like Ben Shapiro. I hope to see how this story, suit plays out.
What will L.A. justice do?
Donald Craig commented 2015-07-20 18:50:03 -0400
a friend of mine says “there is only room for one caitlyn jenner” so he is going back ..
Tom Forsythe commented 2015-07-20 18:26:45 -0400
Usually, I am against pressing charges over a common assault. But in this case, he used a threat of violence in order to interfere with someone else`s freedom of speech. Instead of apologizing, he ratcheted up his comments.

Shapiro needs to make sure everyone know that there are still laws, and that putting on a dress doesn`t change them.
Deborah Graupner commented 2015-07-20 17:25:25 -0400
I hope she gets the pants sued off of her. I’m sick of seeing this face already, and tired of the constant commercials spinning how brave she is. Brave??? That certainly isn’t my definition of brave, especially when you still have your male parts attached. And is Dr. Drew really a Doctor? Or just a TV celebrity?
Cory Simmons commented 2015-07-20 16:59:57 -0400
Gotta love all the people defending Robert Tur. I would love to see how many of them would actually agree to have sex with ‘her’. I’m a man and I love women. I don’t want some mutilated man taking hormones to call my wife. This world is mad. It’s all mental disorder.
Liza Faucher commented 2015-07-20 16:49:26 -0400
I don’t know how Ben put up with her pawing, even before Tur grabbed his neck leaned in and told him to cut it out, or he would go home in an ambulance. Had I been Ben, that is when I would have walked off the stage. Then Tur made it worse, by tweeting the despicable curb stomping comments. Tur threatened Shapiro after the show again, and Shapiro had to be escorted to his car by security. Unbelievable. I’d be pressing charges against Zoey Tur, as well as Dr. Drew and the network.

In the context of the conversation Ben’s comments were appropriate. What wasn’t, was the fact that no one, not even Dr. Drew did anything but defend Tur.

If you have a penis and boobs, wear a dress and sport a woman’s hair style, you are a man in a dress with a boob job. It is not an insult it is a fact. However, I wouldn’t say that on the street to a transgendered person, especially when he was a good foot taller and 50 pounds heavier than me. Or call him sir.
Peter Netterville commented 2015-07-20 16:27:15 -0400
Although disturbing Tur’s threat, what was most disturbing was the response from the host and other panelists whom collectively claimed it was Shapiro’s fault he was threatened.

I don’t holdout any hope that the charges Shapiro have laid will actually come to anything. The LAPD will probably agree with the Tur, the talk show host, and the other panelists that Shapiro deserved the threat.

Binks, you are right, this is an upside-down world we live in.